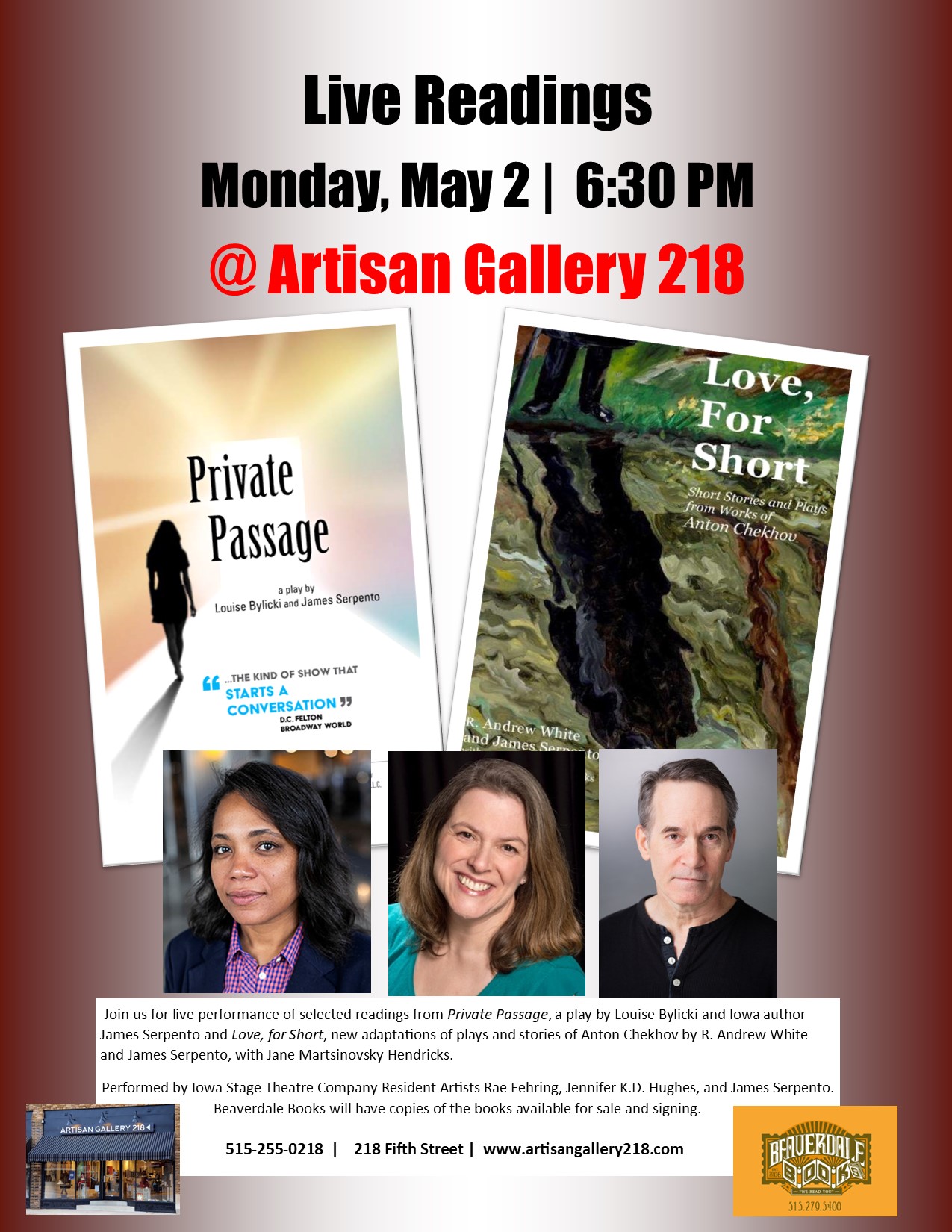 Private Passage and Love, for Short

Join us for a live performance of selected readings from Private Passage, a play by Louise Bylicki and Iowa author James Serpento and Love, for Short, new adaptations of plays and stories of Anton Chekhov by R. Andrew White  and James Serpento, with Jane Martsinovsky Hendricks. The presentation will consist of readings of brief sections from the plays  with a panel discussion to follow.

Beaverdale Books will have copies of the books available for sale and signing.

Private Passage, a play by Louise Bylicki and James Serpento, is a full-length, two-act drama that brings the personal to the political, and makes the political personal, exploring the many provocative sides of the issue of reproductive rights. The play is fluid, moving among times and places in present-day America, sometimes within the same conversation. The story is told through an ensemble cast of seven members. A single actress plays Drew, the 24-year old protagonist while the other six ensemble members (three men and three women) play multiple roles, acting as a chorus or as different characters in various scenes.  Drew, a successful teacher, has always seen herself as being a mother when she is “older.” Discovering that she is pregnant (despite being on the pill), she is deeply troubled about whether or not she and Bobby, her long-term boyfriend, are ready. Bobby, on the other hand, is ecstatic.

Parallel to, and interwoven with, Drew’s story is a flashback of Drew’s older sister Phoebe. At 16, when Phoebe finds out she is pregnant, she tries unsuccessfully to obtain an abortion. Phoebe, an aspiring medical student, takes matters into her own hands, attempts a self-induced abortion, and dies.  The girls’ mother has always been a staunch anti-choice, anti-abortion activist and, after Phoebe’s death, she and Drew made a pact that Drew would always come to her with anything. Now, with the new pregnancy, it is time for Drew to honor that promise and bring the news to her mother, igniting an emotional conflagration. 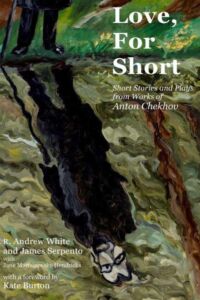 Love, for Short began in Chicago in the late 1990s.  This recently-completed collection now includes 17 new translations and adaptations of short plays and stories of the Russian master Anton Chekhov. Translated by Russian scholar Robert Andrew White, with assistance from Jane Martsinovsky Hendricks, an immigrant from the former Soviet Union, some of Chekhov’s most famous, heartbreaking, and enigmatic works become the basis for both prose and dramatic adaptations. Some are of rich fidelity to the originals, and some are of free-wheeling imagination by White and Iowa playwright/screenwriter James Serpento, but all spring from the authors’ love of one of literary history’s finest chroniclers of the human condition. The Special Edition of the text also includes introductions by White and Serpento, with a foreword by acclaimed actress Kate Burton (daughter of Richard Burton), herself a Russian scholar and performer in productions of Chekhov.

ABOUT THE WRITERS & ACTORS…..

Louise Bylicki has written for the stage and screen. In addition to co-writing Private Passage with James Serpento, she has collaborated with him on the play Every Cottage Home.  In 2020, her screenplay Emile placed as a Second Rounder in the Austin Film Festival and as a Quarterfinalist in the Scriptapalooza Screenwriting Competition. Also in 2020, she was accepted into the From Script to Pre-Production (FS2P) Program with her feature screenplay Relay. This script placed as a top-five Finalist in the Harlem International Film Festival. Her short screenplay “To Place in all Races” was a semifinalist at the Vail Film Festival.  Currently, she is working on a pilot for a mini-series and writes for local websites in New Jersey.  Louise has directed theatre in Chicago and New York, and short films. She holds a B.A. in English from The University of Michigan and an M.F.A. in Film from Columbia University and has taught global film courses at Marymount Manhattan University.

James Serpento is a Resident Playwright Alumnus of the renowned Chicago Dramatists, as well as the Bloomington Playwrights Project, and he is the author or co-author of more than fifty plays and screenplays that have received professional readings or productions.  His NYC credits include Night Class and Of Weddings and Divorces while, in Chicago, his plays A Danse for My Sisterlie, On the El Nighttimes and Private Passage (co-authored with Louise Bylicki) were well-received. Other works have received readings or productions in Los Angeles and various Midwestern cities with, most recently, several short plays in a collection of adaptations of Chekhovian works being produced on audio through the Iowa Stage Theatre Company Scriptease program.  He is a recipient of a National Society of Arts and Letters award for The Yoofo Club, and his play Pasticcio was favorably cited by Plays International. James wrote the screenplays for the five films he directed at AriesWorks Entertainment, and he most recently collaborated again with Ms. Bylicki on a new play, Every Cottage Home. Current projects include the book and lyrics for two new musicals: The Bacchae, co-authored with Jeff Charis-Carlson. 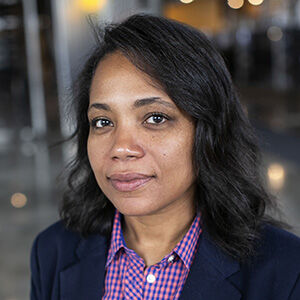 Rae Davis Fehring is a member of the Resident Artist Company with Iowa Stage Theatre. She returned to the stage after a 20 year hiatus to play Big Al in the production of Fun Home. She has recently been seen in Bright Half Life, Exit Strategy, and The Cake with Iowa Stage Theatre Company. Her previous roles include: Ayah in The Secret Garden, Gymnasia in A Funny Thing Happened on the Way to the Forum, and Lucia in Black Coffee. While studying voice at Central College, Rae performed in scenes from such operas as The Marriage of Figaro, Don Giovanni, and The Medium. 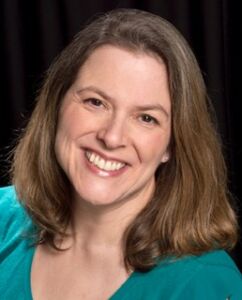 Jennifer K.D. Hughes is an actor, singer, and musician who played the role of the Mother in James Serpento’s 2019 production of Private Passage.  She is a member of the Resident Artist Company at Iowa Stage Theatre Company, recent roles being Lana Sherwood in It’s a Wonderful Life, Hecate in Macbeth, and Elizabeth in The Christians.  Originally from Lacona, Iowa, Jennifer studied theatre and music at Drake University and has been performing on central Iowa stages since 1999.  Past recognitions include Best Actress in a Short Film in 2004 from the Iowa Motion Picture Association for her role in Rick Amundson’s The Power of Love as well as a Cloris nomination for Best Supporting Actress in 2018 for her work in It’s a Wonderful Life.  Jennifer is also a registered nurse and has worked in healthcare for over 30 years, currently working as an at-home medical transcriptionist.  She splits her time between Des Moines and southeast Warren County, where, as a third-generation farmer, she and her partner, Joel Kinser, are raising beef cattle and two daughters on the family farm.