Prepare for another hilarious misadventure as Jane Newell and her zany friends tackle the next Little Missouri mystery in See Jane Sing!

With three months of teaching and one solved mystery under her belt, Jane Newell is back In See Jane Sing!  In short order her Beetle plows into a snowbank, her most rambunctious student hijacks the country school Christmas program, and she stumbles over the body of a teenage boy. Though Sheriff Rick Sternquist warns her not to investigate, Jane ignores his advice when she discovers a tangle of clues.  They suggest that the murderer lives where Jane does – Little Missouri, South Dakota (population 92), in the northwestern corner of the state. With the help of cranky school janitor Velma Albright, switchboard operator Betty Yarborough, and neighbor Merle Laird, Jane closes in on the killer and sings her way into the hearts of the community she now calls home.

“Even a South Dakota blizzard can’t stop Jane Newell or bury the clues she determines to uncover as she tries to solve Little Missouri’s latest mystery. String the Christmas lights, pour a mug of Merle’s hot cocoa, and cozy up for Jane’s latest adventure. As she stitches together costumes for the upcoming pageant and strings together evidence for her case, readers will laugh, ponder, and hum along as they See Jane Sing!” 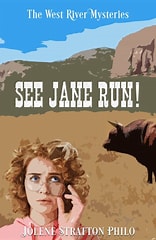 See Jane Run!  In August of 1977, Jane moved out of her parents’ house in Sioux City, Iowa to teach school in Little Missouri, South Dakota. Her mother begged her to come back home when she saw the town of 92 people and heard about the hit-and-run that left one of Jane’s new students without a mother. But Jane doesn’t let go of her Mary Tyler Moore style freedom. Just like Mary she was surrounded by zany characters–from her neighbor Merle Laird and his prize cow Snippy to the glitter-hating school janitor Velma. In such a small town, someone close to Jane was surely the killer.

Before Jolene Stratton Philo became an author, she taught elementary school for 25 years. Seven of those years were spent in northwestern South Dakota. Her first child was born while she and her husband lived there, and their experiences with him resulted in six books for the special needs community.

Her fiction series, West River Mysteries, draws heavily on her years as an Iowan who landed in cowboy country, who taught country school, and who was adopted and cared for by the locals in the tiny town where she lived 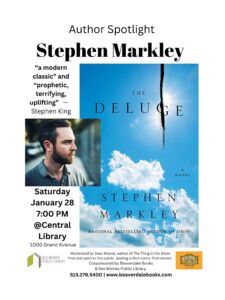