Panel Discussion: The Land Beneath Us 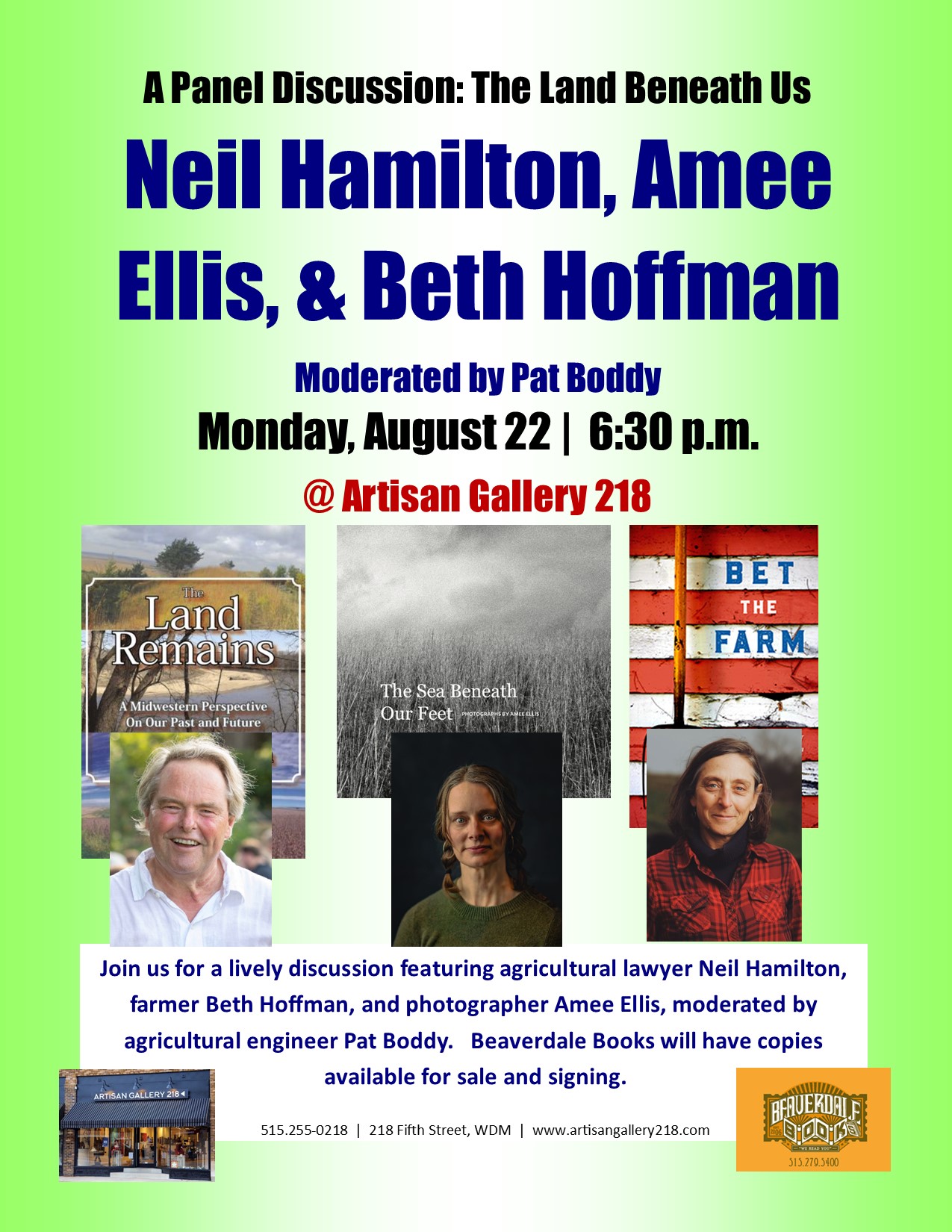 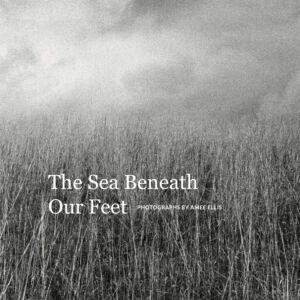 The Sea Beneath Our Feet is a project commissioned by the Des Moines Metro Opera, a photographic interpretation of their 2022 world-premiere opera A Thousand Acres, based on Jane Smiley’s novel. These photographs reflect on the women of the story and the Iowa farm where they grow up, live, and move away from. Three sisters are set to inherit their father’s land, a family legacy acquired over time by perseverance and opportunity. This thousand acres is a place where you look out for your neighbors, but also take advantage of their misfortune. This inheritance comes with expectations, dark truths, and regret. Ellis’ photographs consider the sisters through the Iowa landscape and ask the viewer to contemplate its past, present, and future.

Great forces from glacial drifts created Iowa’s landscape of flat plains, rolling hills, big rivers, and numerous bogs and marshes. Over the course of millennia, a thick spongey mat of deep roots, mycorrhizae, and nutrient-dense earth was formed. Through the heavy labor of early settlers aided by the steel plow, this land was quickly transformed, the prairie tilled and the marshes drained, to allow for rows of cropland and pasture for livestock. The push and pull between what this land was, is, and could be has endured since the first plow busted through the sod. What kind of stewards do we choose to be? What are the consequences of our exploitations?

The Cook farm is a place of order, hard work, and unromantic notions. Farm roles are delineated by gender, and daughters are expected to mind their father, regardless of their adulthood. Ownership of the family farm provides the sisters with control and the potential for choices they did not previously have. Each of these women must reckon with the consequences of her own choices and the choices made for her by others. The shift in each woman’s mindset evolves with the seasons. Spring’s sowing of hope and doubt advances into the fast growth and wild storms of summer. Autumn’s harvest warrants the time to assess and reflect, to put up and put away for winter. What can we learn from the past? What can we become?

Water and ancient seeds remain deep in the soil. The land remembers what it was and what it could be, if given the chance. When things fall apart, the land knows how to become what it desires to be. Ginny, the eldest daughter and narrator of Jane Smiley’s novel reflects: “I was always aware, I think, of the water in the soil, …endlessly working and flowing, a river sometimes, a lake sometimes…. Prairie settlers always saw a sea or an ocean of grass, could never think of any other metaphor, since most of them had lately seen the Atlantic…. The grass is gone, now, and the marshes, ‘the big wet prairie,’ but the sea is still beneath our feet, and we walk on it.” 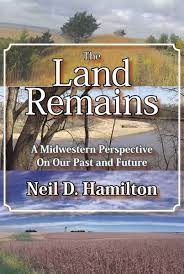 The Land Remains blends personal memoir, a history of Midwestern land conservation, and an analysis of contemporary issues of soil health, water quality, public lands, and future challenges to tell the story how land shapes our lives. Written by Prof. Neil Hamilton, a well-known authority on agriculture and land policy who recently retired after 36 years directing the Agricultural Law Center at Drake University, Des Moines, Iowa. The Land Remains weaves stories from his career working with food and the land to bring a fresh perspective to a topic most people take for granted. The book is narrated in part by the voice of the Back Forty, a field on his family’s farm in Adams County. Influenced by past conservation leaders like John Lacey and Aldo Leopold, as well as efforts by current farmers and landowners who care for and steward the land. The book also weaves new insights from authors like Eddie Glaude Jr. and Jedidiah Purdy to trace the parallels in our attitudes toward the land to issues of historic racism, economic inequality, and environmental vulnerability rooted in our land history.

The Land Remains identifies reasons to be optimistic—we can find hope and resiliency from the land by examining how new attitudes toward land can address past abuses. Demand for better food is creating opportunities for better land stewardship and new farmers, land trusts are helping owners protect unique lands, and conservation practices to improve soil health and protect water quality are laying the foundation for how the Nation will address the challenge of climate change. Whether you are a landowner or a citizen, our history and future are shaped by how we treat the land. The Land Remains will leave readers informed, inspired, and thinking differently about how land will shape the future.

Neil Hamilton is an emeritus professor of law and the former director of the Agricultural Law Center at Drake University in Des Moines. He retired from full-time teaching in 2019 after thirty-eight years focusing on agriculture and food law. Raised on his family farm in Adams County, he attended Iowa State University for Forestry and the University of Iowa for Law. Teaching, writing, and consulting work led to travels around the globe and across the state and nation. His advice is sought by Presidential candidates, cabinet secretaries, reporters, and others looking for insight on issues involving farming, rural society, conservation, and land tenure. He has served for decades on a variety of non-profit boards including the Iowa Natural Heritage Foundation and Seed Savers Exchange. He lives with his wife Khanh at Sunstead Farm, a market garden oasis they created on Sugar Creek, near Waukee, just west of Des Moines. 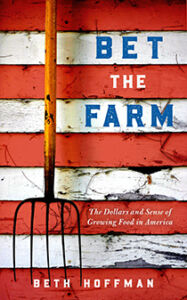 Bet the Farm: The Dollars and Sense of Growing Food in America

Beth Hoffman was living the good life: she had a successful career as a journalist and professor, a comfortable home in San Francisco, and plenty of close friends and family. Yet in her late 40s, she and her husband decided to leave the big city and move to his family ranch in Iowa—all for the dream of becoming a farmer, to put into practice everything she had learned over decades of reporting on food and agriculture. There was just one problem: money.

Half of America’s two million farms made less than $300 in 2019. Between rising land costs, ever-more expensive equipment, the growing uncertainty of the climate, and few options for health care, farming today is a risky business. For many, simply staying afloat is a constant struggle.

Bet the Farm chronicles this struggle through Hoffman’s eyes as a beginning farmer. She must contend with her father-in-law, who is reluctant to hand over control of the land. Growing oats is good for the environment but ends up being very bad for the wallet. And finding somewhere, in the midst of COVID-19, to slaughter grass-finished beef is a nightmare. The couple also must balance the books, hoping that farming isn’t a romantic fantasy that takes every cent of their savings.

Even with a decent nest egg and access to land, making ends meet at times seems impossible. And Beth knows full well that she is among the privileged. If Beth can’t make it, how can farmers who confront racism, lack access to land, or don’t have other jobs to fall back on? Bet the Farm is a first-hand account of the perils of farming today and a personal exploration of more just and sustainable ways of producing food.

Beth Hoffman began her food writing career focused on culture, producing a food series on KUER (an NPR affiliate in Salt Lake City) and receiving a grant to document the stories of immigrant women as they cooked in their homes (which became a radio series that aired on Weekend America). Now twenty years into writing and producing work on food and agriculture, her areas of expertise have grown to include the potential of agriculture in development, the financial viability of farms, and sustainability in agriculture. She has aired and published on NPR’s Morning Edition and on their food blog The Salt, written for The Guardian, New Food Economy, and produced work for the News Hour, Latino USA, and The World. She blogged as the “Hungry Hack” for Forbes.com for two and a half years and wrote a major report and several smaller ones for Oxfam International on how the top ten food and beverage companies in the world contribute to hunger and poverty.

Hoffman also spent much of her adult life teaching, most recently as an Associate Professor in the Media Studies Department at the University of San Francisco, where she created a class “Food Media” looking at the ways in which the media discusses food. She has spoken at several conferences, most notably at the World Food System Center Conference in Acona, Switzerland and at the CropLife America conference in Washington DC. She was a Fellow and Co-Lecturer at UC Berkeley’s School of Journalism (where she also went to graduate school) for the Africa Food and Agriculture Reporting Project and traveled to India, Uganda, and Ethiopia to cover agriculture topics. As Managing Editor of FoodTech Connect and as a freelancer with Free Range Studios in Oakland, she also worked on communications and marketing projects.

Perhaps most importantly, she is now a beginning farmer on a 540-acre farm in Iowa. While she has only lived on-farm since 2019, she has spent every summer on the farm for the past five years. Her husband was raised on the family’s farm, trained as a chef, and was a produce buyer, a wine buyer, and a butcher (for twelve years). Together, they have combined knowledge about almost every aspect of food.

This panel discussion will be moderated by Pat Boddy, a writer, harpist, grandmother, and professional engineer whose work has focused on policy, planning and designing related to water quality and climate. She began her career as a journalist and continues to find work effective when it embraces many perspectives and keeps environmental justice in its sight.

Artisan Gallery 218 is located at 218 Fifth Street in West Des Moines.  Beaverdale Books will have books available for sale and signing.