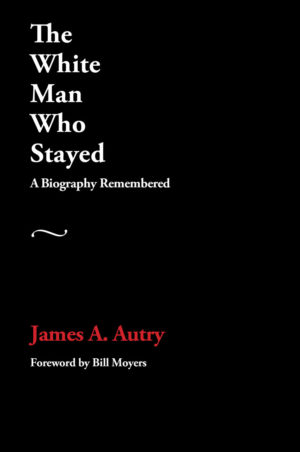 James A. Autry | The White Man Who Stayed

The story of one white man, but also of an epic struggle that still plagues the South.

Following perilous duty on a destroyer in World War II, then becoming the first person in his family to earn a college degree, Douglas Autry returned to his native Mississippi and was elected county superintendent of education. Thus began a heroic journey to bring change to a place and to people who had proved over and over again they did not want any change that threatened their way of life. He braved the condemnation of relatives and friends. He survived imprisonment at Parchman Farm. Once pardoned he went back to his home county and worked harder than ever on behalf of both white and black people.

FOREWORD by Bill Moyers, an American journalist and political commentator. Moyers served as White House Press Secretary under the Johnson administration from 1965 to 1967. He also worked as a network TV news commentator for ten years.

Praise for The White Man Who Stayed

“Having been involved in politics most of my adult life I appreciated the political ‘pearls of wisdom’ contained in this book. It is the day-to-day actions that often impact people more than the big projects. Autry’s book is a reminder of the many unsung heroes making a real difference in people’s daily lives, as well as the value of second chances.”—Hon. Thomas Vilsack, Former Governor of Iowa, and US Secretary of Agriculture

“In James Autry’s most recent book, The White Man Who Stayed, each chapter, each page and every word spoken takes us inside the homes and conversations of southern whites whose birth world of white dominance was disintegrating before them.  James masterfully and honestly opens up the archives of his own mind where stored were private sightings and conversations remembered. In this biography, Autry brings to life, the personal journey of his own cousin who struggled to find his pathway in the only world he knew—the changing South. Unlike young Autry who left the South, his cousin took a deep breath, squared his shoulders and stayed behind.”—Clifton L. Taulbert, Pulitzer-nominated author, The Last Train North, The Invitation, Once Upon A Time When We Were Colored

“This profile in courage reminds us that no matter how ordinary we are, we can choose to stand for what is right. Douglas Autry did, leading Jim Autry to inspire us all through this marvelous story.”—Betty Sue Flowers, Former Director, Lyndon B. Johnson Presidential Library

“The White Man Who Stayed is a deeply touching memoir about a large-hearted man who acted with righteousness in a Mississippi still mired in its racial delusions. James Autry also brings to life a whole pre- and post-civil rights society, acting as a kind of Faulkner clarified, and giving us the context for his cousin Douglas Autry’s bravery and compassion toward blacks and whites alike.”—Stephen Mitchell, translator of the Tao Te Ching

“This is an inspiring story about a man who lived through the racial conflicts of rural Mississippi, taking unpopular stands and working to help poor, under-educated African-Americans find their way. Douglas Autry is an unsung hero who finally gets his due through a memoir/biography written by his cousin, James Autry, one of our country’s best writers.”—Charles Overby, Chairman of the Overby Center for Southern Journalism and Politics at Ole Miss

“With catalytic focus on racial injustice this timely book The White Man Who Stayed provides personal insight into the courageous journey of one man who stood up for equality and stood against hate, subjugation and the Southern Way of Life.”—Drake Sadler, Co-Founder of Traditional Medicinals

“The White Man Who Stayed is the author’s personal tribute to Douglas Autry, a school superintendent in rural Benton County, Mississippi, who devoted his life to helping African-Americans. James Autry praises his cousin Douglas as a rare example of unselfish, courageous public service in a white-dominated closed society and credits him as an important influence in his state and beyond. Douglas Autry’s dedicated service can be summed up in three words: Black Lives Matter. This is the kind of book we need right now.”
—Lawrence Wells, author of In Faulkner’s Shadow: A Memoir.

James A. Autry, a former Fortune 500 executive, is an author of fifteen books, a poet and consultant whose work has had a significant influence on leadership thinking.  His book, Love and Profit: The Art of Caring Leadership, a collection of essays and poetry, won the prestigious Johnson, Smith & Knisely Award as the book which had the most impact on executive thinking in 1992. Love and Profit also has been published in Japanese, Swedish, Chinese, Spanish, and Russian, and is still in print in paperback.

His other books are:  Looking Around for God, The Oddly Reverent Observations of An Unconventional Christian, The Book of Hard Choices, The Spirit of Retirement, The Servant Leader, Real Power; Business Lessons from the Tao Te Ching (with Stephen Mitchell), Confessions of An Accidental Businessman, Life and Work: A Manager’s Search for Meaning, Life After Mississippi. Nights Under a Tin Roof.

In addition, Autry has written the introductions to several books, and his writings have appeared in many anthologies and magazines.  In late 1991, the Kentucky Poetry Review published a special James A. Autry issue.  He received considerable national attention when he was one of the poets featured on Bill Moyers’ special series, “The Power of the Word,” on PBS, and Garrison Keillor has featured his work on “The Writer’s Corner” on public radio.  Autry is also featured in three videos, “Love and Profit,” which won a “Telly” award,  “Life and Work,” and “Spirit at Work.”

Before taking early retirement in 1991 to pursue his present career, he had a distinguished career at Meredith Corporation where he was Senior Vice President and President of its Magazine Group.  Mr. Autry has also been active in many civic and charitable organizations and most notably has worked with disability rights groups for 30 years.  Other involvement has included his work with the Epilepsy Foundation of America, the national advisory committee of the White House Conference on Families, the Des Moines Symphony, and others.  He is a founder of the Des Moines National Poetry Festival.

Autry has been instrumental in shaping the field of service journalism and has worked to establish service journalism chairs at the University of Missouri and the University of Mississippi, where he was named a Distinguished Alumnus and was elected to the Alumni Hall of Fame.  He fulfilled his military service as a jet fighter pilot in Europe during the cold war.  He holds four honorary degrees and in 1991, the University of  Missouri-Columbia awarded him the Missouri Medal of Honor for  Distinguished service in Journalism, an award given for a long track record of excellence. In 1998 he received the Lifetime Achievement Award for Service to the Humanities from Iowa Humanities Board and Foundation. He was also the founding chair of the Claremont Graduate University’s Humanities Center Board of Visitors.

Autry lives in Des Moines, Iowa, with his wife Sally Pederson, the former Lieutenant Governor of Iowa, and their adult son.