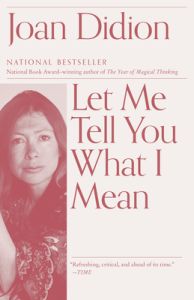 Here are six pieces written in 1968 from the “Points West” Saturday Evening Post column Joan Didion shared from 1964 to 1969 with her husband, John Gregory Dunne about: American newspapers; a session with Gamblers Anonymous; a visit to San Simeon; being rejected by Stanford; dropping in on Nancy Reagan, wife of the then-governor of California, while a TV crew filmed her at home; and an evening at the annual reunion of WWII veterans from the 101st Airborne Association at the Stardust Hotel in Las Vegas. Here too is a 1976 piece from the New York Times magazine on “Why I Write”; a piece about short stories from New West in 1978; and from The New Yorker, a piece on Hemingway from 1998, and on Martha Stewart from 2000. Each one is classic Didion: incisive, bemused, and stunningly prescient.