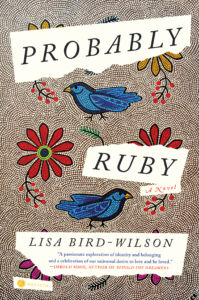 This is the story of a woman in search of herself, in every sense. When we first meet Ruby, a Métis woman in her thirties, her life is spinning out of control. She’s angling to sleep with her counselor while also rekindling an old relationship she knows will only bring more heartache. But as we soon learn, Ruby’s story is far more complex than even she can imagine.

Given up for adoption as an infant, Ruby is raised by a white couple who understand little of her Indigenous heritage. This is the great mystery that hovers over Ruby’s life–who her people are and how to reconcile what is missing. As the novel spans time and multiple points of view, we meet the people connected to Ruby: her birth parents and grandparents; her adoptive parents; the men and women Ruby has been romantically involved with; a beloved uncle; and Ruby’s children. Taken together, these characters form a kaleidoscope of stories, giving Ruby’s life dignity and meaning. Probably Ruby is a dazzling novel about a bold, unapologetic woman taking control of her life and story, and marks the debut of a major new voice in Indigenous fiction.