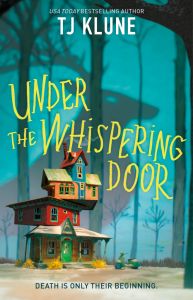 We have signed copies!

When a reaper comes to collect Wallace Price from his own funeral, Wallace suspects he really might be dead.

Instead of leading him directly to the afterlife, the reaper takes him to a small village. On the outskirts, off the path through the woods, tucked between mountains, is a particular tea shop, run by a man named Hugo. Hugo is the tea shop’s owner to locals and the ferryman to souls who need to cross over.

But Wallace isn’t ready to abandon the life he barely lived. With Hugo’s help he finally starts to learn about all the things he missed in life.

When the Manager, a curious and powerful being, arrives at the tea shop and gives Wallace one week to cross over, Wallace sets about living a lifetime in seven days.