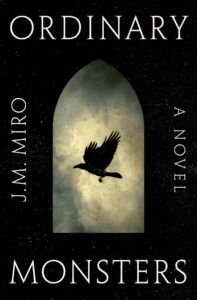 Julie’s Notes: Atmospheric, seething with tension and grit but just enough heart to claw its way into your brain. I’ve been thinking about this book daily since I finished it months ago. I think it might’ve changed something inside me that needed changing. If you like gothic, labyrinthine, doorstopper-sized novels that will keep you up late, this is for you.

England, 1882. In Victorian London, two children with mysterious powers are hunted by a figure of darkness —a man made of smoke.

Sixteen-year-old Charlie Ovid, despite a lifetime of brutality, doesn’t have a scar on him. His body heals itself, whether he wants it to or not. Marlowe, a foundling from a railway freight car, shines with a strange bluish light. He can melt or mend flesh. When two grizzled detectives are recruited to escort them north to safety, they are forced to confront the nature of difference, and belonging, and the shadowy edges of the monstrous.

What follows is a journey from the gas-lit streets of London, to an eerie estate outside Edinburgh, where other children with gifts—the Talents—have been gathered. Here, the world of the dead and the world of the living threaten to collide. And as secrets within the Institute unfurl, Marlowe, Charlie and the rest of the Talents will discover the truth about their abilities, and the nature of the force that is stalking them: that the worst monsters sometimes come bearing the sweetest gifts.

With lush prose, mesmerizing world-building, and a gripping plot, Ordinary Monsters presents a catastrophic vision of the Victorian world—and of the gifted, broken children who must save it.